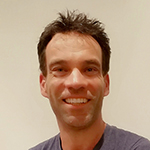 The primary aspect of my research work is the study of central nervous mechanisms of agonist and antagonist muscle activity control during voluntary and involuntary contractions in humans.

This work is based on the analysis of the link between the central nervous commands, the muscles activity and the muscle’s mechanical action. The study of these mechanisms in different populations can include investigating the effects of the level of antagonist muscles activity on the modulation of central nervous commands. Experimental tasks include anisometric (i.e., concentric or eccentric) and isometric voluntary contractions, and involuntary contractions of antagonist or homologous muscles. The influence of the contraction type (i.e., discrete, rhythmic …) as well as the force level of force is also investigated.

These projects involve experimental techniques, modeling and processing of electrophysiological signals at the border of neuroscience and biomechanics, including especially cortico-muscular coherence and musculoskeletal modeling.